Posted at 19:01h in Blog, Finding Peace by Sarabeth Persiani

One of my favorite simple pleasures in summertime is driving with the windows down. The cool air and earthy smells of living near wooded lots and lakes in central Massachusetts is heaven.

Every once in a while I’ll catch a hint of a campfire and I’m transported back to the summers of my childhood. Random memories spark as quick as a match and similarly taper out. Scent memories are like that—they come vividly and unexpectedly, like a lovely surprise, and help us remember…

~ Racing with Mom to swim from the dock, over to the baby beach and her winning every time…even once with a cast on her leg from knee surgery!

~ Excitedly greeting Dad, at the end of the day, thrilled about the variety flavor pack of Miscoe soda he’s setting down on the picnic table. And then grappling with the big decisions of life, whether to go with birch beer or cream soda, feeling strangely independent and super cool drinking from a real glass bottle.

While driving I’ll occasionally glance back in the rearview mirror and spot my daughter’s serene expression, her face angled to catch the summer breeze. She’s forming her childhood impressions and I hope, despite the distractions and strain of my caregiving years (her early years), that rich contented memories lie in store for her too.

Research says that most people’s autobiographical memories come from verbal and visual cues that peak when they are in their teens and twenties—the years when we establish ourselves in the world, going to college, getting married etc. However, for smells, the peak age is around five and not surprisingly, those memories are more emotional and vivid.

That’s true for me. I can recall the pine and dried leaf scent of the campground where our rusty family trailer was parked for over sixteen years. It was where we camped from the day school was released in late June until Labor Day weekend. In my mind’s eye, I can evoke every detail, right down to the filtered light coming through the trees, making patterns on the dirt path that led from our campsite to the water. My sisters and I went barefoot all season and with toughened soles, knew just where to step to avoid the more jagged places. I can hear the creaking slam of the screen door to the bath house and Connie Francis singing “Where the Boys Are” from Mrs. Moore’s turntable, two lots over. It seemed there was always a chainsaw buzzing in the distant background, which sounded to me like low and then high-pitched bouts of laughter.

Decades later, as a working mother dropping my daughter off at the YMCA summer day camp just a few miles down the street from that same family campground, I would breathe in the memory-infused woodsy smell and often feel a deep sense of loss. The loss that many of us know, of mourning a loved one, stolen away by the misfortune of Dementia or Alzheimer’s, even though, in reality, they may be living at home with you or nearby. The drop-off meant switching gears, away from my daughter, my heart, to a compartmentalized lifestyle which involved one persona, focused on a full-time job, and another who raced during lunch and after work to visit a frail father in the nursing home. I knew well the transition from the rushed pace of the corporate world to what was initially an excruciating snail’s pace of the lame elderly or dawdling child. It goes with the territory for family caregivers and at times the weight of responsibility is heavy.

This is why news of medical advancements and research regarding early detection and treatment for Alzheimer’s and Dementia is so heartening and welcomed. This month, research from the Alzheimer’s Association International Conference shared that subtle shifts in our senses of sight and smell may be the key to early detection of Alzheimer’s, even before more obvious symptoms surface.

Recently on CBS This Morning, medical contributor Dr. David Agus reported that there are “tests that focus on the sense of smell, involving a panel of 40 scratch-and-sniff surfaces scented with a range of familiar scents including turpentine, lemon, licorice, bubble gum and even eau de skunk. If you can identify over 35 of them, you have a much lower chance of progressing to Alzheimer’s. Below 35, it shows that it might be starting,” said Agus.

“It’s not the sensitivity of the nose itself that diminishes, he pointed out. Rather, as cognitive impairment develops, the brain is less capable of identifying what those smells are. The hope is that such tests could eventually lead to an easier way to accurately diagnose Alzheimer’s early on — a welcome alternative to having to undergo injections and imaging of the brain, including exposure to radiation.”

He also discussed another new study presented at the Alzheimer’s conference that focused on whether it’s possible to ward off Alzheimer’s by training your brain with a specially-designed computer game.

“This is a game where you either looked at memory, reasoning or processing. Speed processing — if you did it for an hour for ten times — decreased the incidence of Alzheimer’s by over 30 percent over ten years. If you did a refresher at one and three years, [there was] a 48 percent reduction…”

From my non-scientific, layman’s perspective, it seems logical that memory and smells are intertwined. Scents evoke our earliest rudimentary associations and we’re lucky to tap something so precious on any given day. Whether our memories are sun-dappled moments afloat on a lake, or heartfelt goodbyes in days jam-packed with responsibilities to job and family, they are treasures, the golden stuff of our lives.

(Note: Approximately 5.4 million people in the U.S. have Alzheimer’s — one in nine people age 65 and up — and it’s the sixth leading cause of death, according to the U.S. Centers for Disease Control and Prevention and the Alzheimer’s Association.)

Sarahbeth Persiani is the author of Run, Walk, Crawl- A Caregiver Caught Between Generations. For five years, Sarahbeth was the primary caregiver for her Father, who had dementia, while working full-time and taking care of her own family. As the founder of We Are Sharing the Sun, her focus these days is to help companies create a supportive culture for family caregivers and provide education, support and encouragement for working professionals who are themselves in the sandwich squeeze. 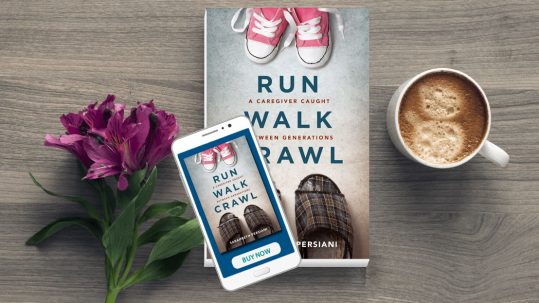 Soon I’ll have an official pre-order page on Amazon. In the meantime,
please feel free to submit your contact info and I’ll notify you when it’s ready.
Oh – and I’m planning a special something for people who pre-order too!
Thank you very much for your support. I welcome shared stories and would love to hear from you.
All my very best, Sarahbeth